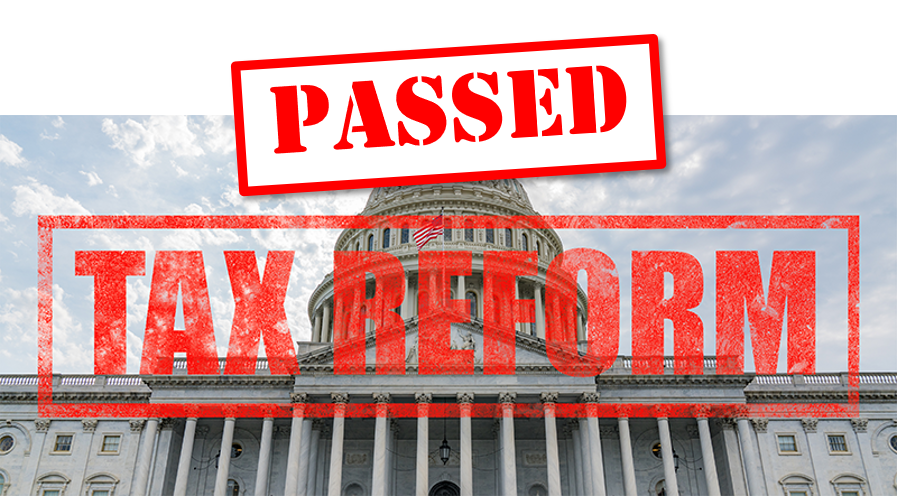 Whether you’re an individual taxpayer or a business owner, you woke up to good news this morning. Both houses of Congress have passed the Tax Cuts and Jobs Act, and President Trump is poised to sign it soon. It will take some time for everyone to digest all the details of this massive bill, but there are many things we know for sure. Take a look.

2018 may be the best year for businesses economically in a long time, thanks to new legislation

The country has been waiting more than 30 long years, but it’s here: major tax relief for U.S. businesses. If you’ve been held back from expansion due to crippling tax burdens, it’s time to start putting your growth plans into action.

The Tax Cuts and Jobs Act, just passed by both houses of Congress and awaiting President Trump’s signature, promises to banish many economic obstacles that were previously in your way. Your business is now more likely to advance in areas you weren’t able to up to now.

The need has existed for many years, but a new, much lower corporate tax rate will soon become a reality, making the U.S. a far more attractive place to do business.  Effective for the tax year beginning January 1, 2018, C Corporations—but not S Corporations or LLCs—will see their rate plummet to 21 percent.

Further, the Alternative Minimum Tax for Corporations will be repealed.

The legislation would effectively make the top individual tax rate 29.5 percent on pass-through income if you qualify for the 20 percent deduction.

There are numerous other changes that may affect you depending on how your business finances are structured. For example, the Tax Cuts and Jobs Act would eliminate operating loss carrybacks. Net operating losses arising from tax years after December 31, 2017, will only offset up to 80 percent of taxable income. But they would be allowed an indefinite carryforward.

100 percent bonus depreciation will be allowed for both new and used property placed in service after September 27, 2017, with phase-outs beginning in 2023.

Research & Development (R&D) expense (including internally-developed software), defined in Section 174, will also see changes; businesses will be required to capitalize and amortize them over a period of five years. In fact, Section 174 R&D expenditures are defined more broadly under GAAP. When preparing and modeling cash flow effects, businesses should do analysis in advance.

It’s hard to find a major area of business finance that won’t be touched by the Tax Cuts and Jobs Act. The new law would cap the net business interest deduction at 30 percent of adjusted taxable income (before interest, taxes, depreciation, and amortization, or “EBITDA”) for four tax years. After January 1, 2022, “EBIT” (before interest and taxes) would be employed.

You’ll see many other changes as well. For example:

Understandably, a law consisting of many hundreds of pages will take some time to unpack, analyze, and implement. We stand ready to help best position you during the coming tax year as we all learn about the impact the Tax Cuts and Jobs Act will have on your business. Let us know how we can assist.