Forgiven PPP Loans and the Deductibility of Expenses Paid 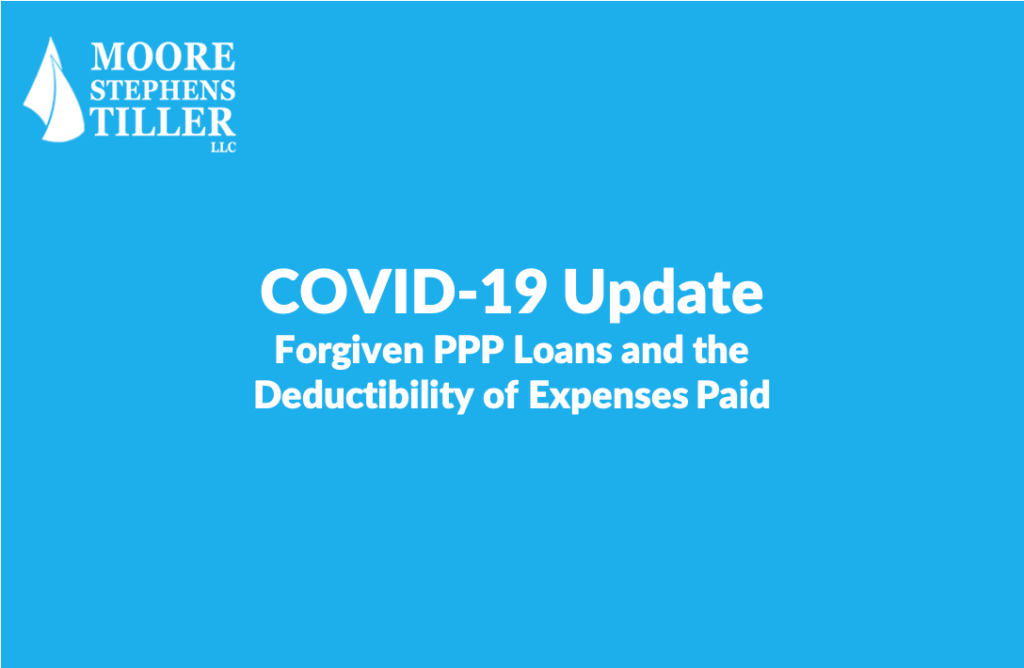 As a part of the CARES Act (Sec. 1102), the Small Business Administration (SBA) made available PPP loans, for the purpose of aiding businesses to help keep their workforce employed during the COVID-19 pandemic. The SBA would not require repayment of the loan if a business kept employees on its payroll for eight weeks and used the loan money for payroll, rent, mortgage interest, or utilities with 75% of the loan amount forgiven being used for payroll. While loans that are forgiven would normally be considered cancellation of debt income, the CARES Act specifically states in Sec. 1106(i) that any forgiven loan amount will excluded from gross income.

Currently, the IRS has issued Notice 2020-32, in order to provide guidance regarding the deductibility for Federal income tax purposes of certain otherwise deductible expenses incurred in a taxpayer’s trade or business when the taxpayer receives a PPP loan. Pursuant, to Notice 2020-32, “no deduction is allowed under the Internal Revenue Code (Code) for an expense that is otherwise deductible if the payment of the expense results in forgiveness of a covered loan pursuant to section 1106(b) of the Coronavirus Aid, Relief, and Economic Security Act (CARES Act), Public Law 116-136, 134 Stat. 281, 286-93 (March 27, 2020) and the income associated with the forgiveness is excluded from gross income for purposes of the Code pursuant to section 1106(i) of the CARES Act.” Therefore, currently to the extent that any PPP loan is forgiven and excluded from a taxpayer’s gross income, such taxpayer will not be entitled to deduct ordinary and business expenses that were paid by the forgiven loan proceeds.

On May 5, 2020, the Small Business Expense Protection Act of 2020 (S. 3612) was introduced to the Senate. This bi-partisan legislation clarifies that ordinary expenses that are backed by PPP loan proceeds will be deductible as normal ordinary expenses. This bill, if passed, will reverse the federal treatment of disallowing ordinary expense deductions that are funded by PPP amounts as stated in Notice 2020-32. The lawmakers that introduced S.3612 believe its passage is necessary in order to achieve the PPP’s true goal of providing relief to small businesses affected by the COVID-19 pandemic. Specifically, the lawmakers believe that, “Providing assistance to small businesses, only to disallow their business deductions as provided in Notice 2020-32, reverses the benefit that Congress specifically granted by exempting PPP loan forgiveness from income.”

If S.3612 is to become law, a rolling conformity analysis will likely not need to be conducted in order to determine if states will allow expense deductions funded by PPP loan proceeds, as federal preemption will require states to allow for the deduction. Currently S.3612 has been introduced to the Senate and has been assigned to the Senate Committee on Finance. Next step is for the Committee to send the bill to the Senate floor for debate or a subcommittee for further research. If it does go to the Senate floor and receives a majority vote, the bill will move to the House of Representatives for a similar process of committees, debate and voting. Once both houses approve the final bill, it will go to the President for signature or veto.

Taxpayers who have received PPP loans and satisfied the conditions necessary to result in partial or full forgiveness of the loan amount, must determine whether they are able to deduct the ordinary business expenses that the taxpayers paid with their PPP loan proceeds. Absent any specific comment from the states regarding these expense deductions, a conformity analysis should be done to determine whether a state conforms to the CARES act and the IRC generally. If a state conforms to the CARES act, the states will follow the current Federal treatment to exclude any forgiven PPP amount from gross income and disallow any deduction for any associated expenses. While the Federal treatment currently disallows PPP expense deductions associated with forgiven loan amounts, new measures and proposals, will likely result in expense deductions associated with PPP being allowed at a later time.

Taxpayers and practitioners should also keep an eye on the S. 3612 to see whether it becomes law and thereby allows taxpayers to take the ordinary expense deductions paid for by PPP loans. As a reminder this bill is in the first stage of the legislative process and may take time for it to actually pass – so stay tuned!

This article was written by the Moore U.S. National Tax Office, associated with the Moore Global Network. © 2020. All rights reserved. Used with permission.